Wolfie and the string of coincidences 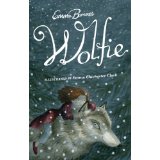 I'm a sucker for book competitions, as long as I don't have to do too much to win! Retweeting, making a comment on a blog or sending a simple email are about my limits - slogans and other brain-troubling demands are not for me. And I have a pretty good track record - at least once a month a new title wings its way towards me. I read them all, and those that I don't keep get passed on either to friends or to the library. That way, more people get to hear about the authors so I think it's great publicity for them.
My latest acquisition is Wolfie by Emma Barnes (Strident, 2012). This is how the blurb describes it:

"Lucie has always longed for a dog. But not one this big. Or with such sharp teeth. Or with such a hungry look in its eyes. Lucie realises her new pet is not a dog...but a wolf. Not only that, but a wolf with magical powers. A talking wolf is not an easy thing to hide from your family and friends. Or from the bully next door. And as Lucie grows to love Wolfie, she also realises that her new companion is in terrible danger…"

Intrigued? I was. Mind you, at first I wasn't too keen on Lucie who was looking forward to her uncle's visit only because she knew he was bringing a present (the "dog"). However, her relationship with Wolfie soon proves she's not as self-centred as I thought, but is loving and loyal. The pair are very protective of each other because of the secret they share about Wolfie's special powers, and Lucie has to use all her ingenuity to prevent it being found out. Along the way, they have some magical experiences, make some good new friends and outwit Marcus, the bully next door. Although all the ends are tied together at the end, Wolfie's parting shot is "Something tells me this will not be the last of our adventures!" so I think we can look forward to a sequel.

Who else would like this book? Confident readers from about 7 onwards - apart from the power of the story, it's not too long (132p), the type is clear and it's illustrated throughout by Emma Chichester Clark whose style many young readers will already be familiar with from her picture books. For more information about Emma Barnes, see this interview on Books Events for Children. Her own website is here and she also writes on An Awfully Big Blog Adventure, including this post which is very supportive of libraries.

And where do the coincidences come in? Well, I won this book from the publisher (Strident) whose Managing Director wrote to say: "We had entries from all around the country, but when my London-based colleague gave me your address details I found she’d chosen a winner who lives around the corner from our editor and works in the library near the building my father used to run (Jordanhill College). And Strident is based not so very far away in East Kilbride. You couldn’t be closer!" I glanced at his name - Keith Charters - and instantly remembered his father, Graham Charters, who was College Secretary when I first went to Jordanhill. In my reply, I mentioned that I had previously worked in East Kilbride Libraries. Turns out Keith takes his six-year old son there! Maybe not coincidences exactly, but it does show the intertwined, and friendly, nature of the book and library world.
Posted by Anabel Marsh at 09:37