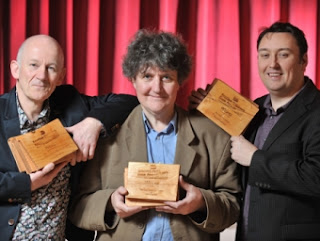 It's World Book Day today, an entirely appropriate time for the winners of the Scottish Children's Book Awards (SCBA) to be announced. And here they are, left to right:

Jonathan Meres - Winner for 8-11s for  The world of Norm: may contain nuts

Barry Hutchison - Winner for 12-16s for The 13th horseman

Congratulations to all - STV Edinburgh has been quick off the mark with an interview with Jonathan and John.

It's also the day for the Blue Peter Book Awards - an embarrassment of riches. They'll be announced later today on a special edition of the programme.

Other recent prizes that you might want to check out are the Red House Children's Book Awards and the Cybils. The former is the only national book award voted for entirely by children; the latter is the Children's and Young Adult Bloggers Literary Award. Jacqueline Wilson and John Burningham have both been nominated by IBBY UK (International Board on Books for Young People) for Hans Christian Andersen Awards 2014.

As well as news about SCBA, the most recent Scottish Book Trust newsletter has information about new resources on Coraline, a forthcoming Authors Live event with Polly Dunbar and a new range of CPD opportunities for librarians and teachers on reading for pleasure and creative literacy.

The Harriet Branford Writing Competition is now open to children and young people under 19. Entrants should write a story of up to 1500 words following on from a starting paragraph by Annabel Pitcher. The closing date is 26th April.

Cool not Cute! is a new(ish) website dedicated to starting a debate on gender bias in picture books. Do you agree that "the output of the picture book industry reflects girls' tastes far more than it does boys' and that this bias is exacerbating the gender gap between boys' and girls' reading abilities"? Yes or no, head over to the site to join the discussion.