It was a lovely surprise earlier this month to find a parcel of picture books from Templar Publishing awaiting my return from holiday - though it's taken me a few weeks to get round to reviewing them. Here they are now: 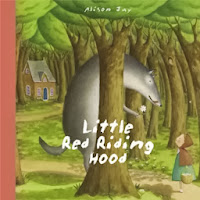 This retelling of a classic story is firmly aimed at children who are already well-versed in fairy tales. The text is much less important than the illustrations - crackle-glazed paintings in (according to the blurb) "Alison Jay's much admired style". Personally, I don't care much for the tiny-featured faces and spindly limbs, but I do love the concept. Although Red Riding Hood is the main character, she lives in Fairy Tale Village, where her Mum runs the tea shop, and all around her other fairy tale characters are taking part in their own stories. Children will have great fun spotting these - I found more every time I looked - and could be encouraged to tell the story of, say Hansel and Gretel, themselves. NB the fates of the baddies in these tales have been considerably toned down! No wolves appear to have been harmed in the telling. 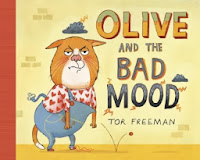 Olive is having a really bad day - something has put her in a bad mood (make sure you start reading well before the title page to find out what) and she just can't snap out of it. Not only that, it makes her behave badly towards her friends (a variety of animals in clothes), putting them down in a most unpleasant fashion. Then - she passes a sweet shop and a bag of jelly worms puts all to rights! Except that, she discovers, her friends are all now in bad moods - I wonder why? It doesn't occur to Olive that she might be the cause, but she passes her sweets around, cheering everyone up, until the bag is empty and her bad mood returns. Primary school children often learn about feelings through stories - see Strathclyde University's list of suitable picture books - and this title is a good addition to the canon. Some might object to Olive's bad behaviour going unpunished, although she partially makes up for it by sharing her sweets generously. Children have mood swings like the rest of us and need to learn about the less positive emotions too, helped here, for those who can't yet read or aren't good at interpreting facial expressions, by the little black clouds which appear over the unhappy heads.

Children love pop-ups, and paper engineer Mansfield and illustrator Lohlein have done a grand job with this one. The story is minimal but pleasingly repetitive as each fishy character gets eaten up by a bigger one. This could be a useful introduction to the concept of the food chain, though possibly not for the over-sensitive - that shark's teeth are awfully big! The strength of the book though is, well - its strength. Many pop-ups are fiddly and flimsy and soon fall to pieces, but this one seems sturdy enough to survive multiple readings.

Thanks to Templar for sending me the books. They'll all be on their way to good homes in local libraries soon.
Posted by Anabel Marsh at 12:43