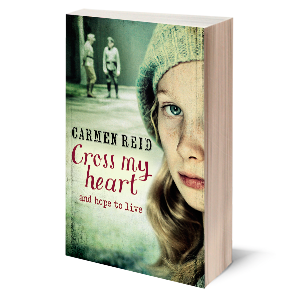 The usual follow up to "Cross my heart" is "and hope to die". Here, it is "and hope to live" - for someone who has very little chance of that. Nicole is 15 and a resident of Nazi-occupied Brussels. She joins the Belgian Resistance and is transformed into Coco of Group K. La Belle, one of her fellow agents, reveals that she thinks she'll be lucky to be alive in 6 months time, and Coco too is soon risking her life for her beliefs.

The gruelling subject matter is leavened both by the romance between Nicole / Coco and fellow agent Anton / The Poet and the author's fluid writing. I whizzed through it. When I first started reading, I was sceptical that 15 year olds would have been involved in the Resistance to this extent. Nor was I convinced that Coco could have escaped some of the situations she faced in quite the way described. However, Carmen Reid's afterword makes it clear that, although fictional, her story is based on considerable research which is detailed on her website. The afterword is also worth reading for Carmen's story of her own family - she is half British, half German, and her grandparents were on different sides of the Second World War. Cross my heart is, touchingly, dedicated to them.

I won this book in a competition on Scottish Book Trust's website. I'm grateful, as always, to them for everything they do. I'm now going to donate it to Glasgow Women's Library's collection for younger women. As Carmen says "Soon all the grandparents who fought in this momentous war will be dead. We need to preserve their stories and experiences. Teenagers need to remember there was a time when turning eighteen didn't mean being able to drink and go to uni; it meant you were old enough to fight, kill people and die for your country." Her book is testament to that.