My good luck in winning books through social media seems to be holding up! Many thanks to DA Nelson (Dawn) for all three books in her DarkIsle series which I won through her blog.

I've just finished the first book, which was awarded the Scottish Children's Book Award in 2008. I can see why - it's an engaging fantasy which starts in a real world which will be recognisable to many Scottish children. The main character is Morag, a young girl living with cruel foster parents who lock her in the cellar for some imagined misdemeanour. When she first hears voices, she is terrified - until she finds they belong to Bertie and Aldiss, a dodo and a rat! Against their better judgement, these two are persuaded to take Morag along with them in their quest - and what that is becomes clearer as the story progresses.
﻿﻿﻿﻿﻿﻿ 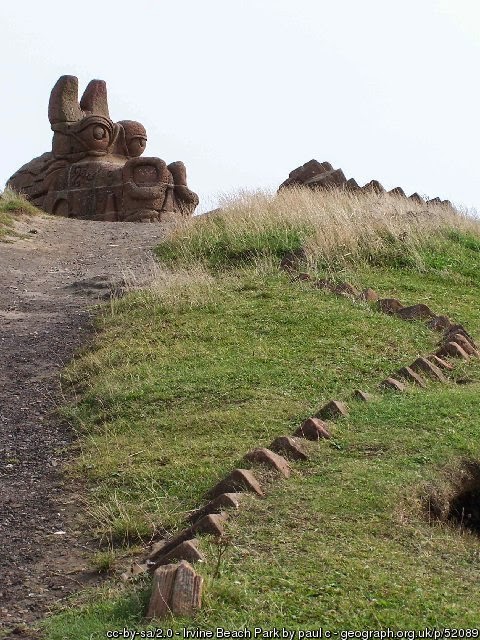 Their first task is to free Shona, a dragon who has been turned to stone by the evil Devlish - and Shona actually exists! Well, in stone form anyway. She's a sculpture by artist Roy Fitzsimmons and that's her on the left on Irvine Beach (© Copyright paul c and licensed for reuse under this Creative Commons Licence). The four friends then set off for the DarkIsle where they must rescue the Eye of Lornish. Do they achieve this? Well, that would be telling, but you'll have great fun finding out as you meet more lovely characters along the way, such as Henry the talking medallion, as well as some frightening and distinctly unpleasant ones, Tanktop the Klapp Demon being a case in point.

You'll also spot a few clues about what might have happened to Morag's parents, but I'm guessing the full answer to that won't be revealed until the second or third book. Those are DarkIsle: Resurrection and DarkIsle: The Final Battle. I'll be reading them next. Once I've finished, they'll be added to the children's collection at Glasgow Women's Library. Dawn actually works near there, so she came into the library to give me the books - you can see a picture of us together on Darkislethebook's Blog. Thanks again, Dawn, for your generosity.
Posted by Anabel Marsh at 12:53