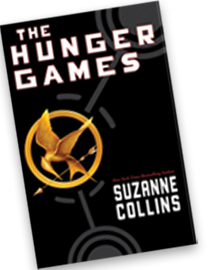 I watched the Hunger Games film while I was on holiday. I must say I was disappointed - I didn't expect it to be as gripping as Suzanne Collins' books, which I've written about before, but having read the reviews I thought it would be more exciting. If I hadn't known about them beforehand I'd have been hard-pressed to care very much about any of the characters, they all seemed very dreary to me! Anyway, I thought about it again when I read the article Hunger Games credited with making archery cool in the Guardian - the main character, Katniss, relies on her bow and arrow to survive, and apparently, especially in the US, uptake of archery amongst young people has shot up - no pun intended. (Mind you, we have to be grateful that We need to talk about Kevin hasn't had a similar influence.) The question in the article was asked, of course, in the context of the Olympics - it was one of the US archery team who trained the actress playing Katniss.

I'm never sure how long these kind of effects last. The Olympics have been credited with providing better female role models, making us more likely to play sport and giving us an increased sense of Britishness, but I don't imagine any of it will last much longer now that the Games have finished. I doubt, for example, that they will have much influence on the Scottish referendum in a couple of years' time. Jonathan Douglas suggests another possible effect when he asks on the National Literacy Trust site, Will the Olympic Games inspire a nation of readers?, partly because: "the opening ceremony featured a fabulous children’s literature mash-up. It was wonderful to see stories for children at the heart of the celebration of our nation." Again, it would be nice to think so, but it seems a long shot to me (no pun intended again, it just comes naturally). Finally, We love this book has a piece by Sarah J Maas on kick-ass heroines, such as Katniss, in which she concludes that "the rest of the world is finally waking up to the idea that girls can be in these lead roles, that they can save the day and don’t need to wear a sexy, half-unzipped leotard to do it." Maybe not quite in tune with the Olympian role-model idea, because some of the female athletes do indeed wear sexy leotards, but anything - books, sport or whatever else - which might make girls think that they can aspire to more than being a skinny model is surely a good thing?
Posted by Anabel Marsh at 17:23