Can we save the tiger? 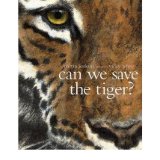 The School Library Association celebrated the 2012 Information Book Award on Monday 22 October 2012 with a prize-giving event at the Free Word Centre in London. The full list of winners is here, with the most successful book undoubtedly being Can We Save the Tiger? by Martin Jenkins, illustrated by Vicky White and published by Walker Books (ISBN 9781406319095). It won its section (7-12) in both the Children’s Choice and the Judges' Choice as well as continuing its clean sweep as the Overall Winner in Children’s and Judges' Choices.

Coincidentally, guest blogger Gordana Nesterovic recently sent me a review of this book - here's what she had to say:

After attending a book judging event, I feel the way I look at picture books has changed forever. My impressions of this experience were still fresh when I came across Martin Jenkins’ book Can we save the tiger? with illustrations by Vicky White. This is a non-fiction picture book that tells us about endangered species, wildlife and other aspects of conservation. It focuses on the reasons some species have become endangered and acknowledges the difficult choices faced by humans, sympathizing with, rather than vilifying them, for the decisions they make. It explains difficult concepts very clearly and gives positive examples of what has been achieved so far. While not attempting to teach everything there is to know about the subject, it does offer so many ideas that it inspires one to find out more.

The style of writing makes it easy to understand the problem and the impact it might have, and would appeal to a wide range of abilities as the typography is cleverly used to give as much or as little information as the reader requires. The main statements are made in a large font and are very catchy, but as more details are given, the font gets smaller and it changes shape. This allows the reader to dig deeper into the subject and find out more facts, but also makes it fun to look at, keeps interest going and is very aesthetically pleasing. Some pages have larger block of texts, some have very few words, and some just a double spread of illustrations which add powerful images to the text. They are mainly pencil drawings on cream coloured paper, with only a few in colour, and they really capture the spirit and beauty of each animal as well as showing the dangers they face. Some pictures are accompanied by captions containing facts about each animal, again, with clever use of typography.

This book is so well done that it could provide a tool to teach many other topics, not just conservation. It could be used in art classes, or it could be used to teach non-fiction writing, as a prime example of how text and illustration work together, complementing and bringing out the best in one another. It would be nice to find a similarly effective way of teaching other important issues. In the meantime, look out for other books by these authors: Martin Jenkins, a conservation biologist, has written several nonfiction books for children, including Ape, Grandma Elephant’s in charge, The Emperor’s egg, and Chameleons are cool. Vicky White worked as a zookeeper for several years before earning an MA in Natural History Illustration from London’s Royal College of Art. She made her picture book debut with Ape.
Posted by Anabel Marsh at 15:35