The Scottish Children's Book Awards shortlists have been announced today! It's an eclectic selection from a mess loving monster to an accidental time-traveller and an angel with a terrible sense of direction. The choices are: A string of paper dolls go on a fantastical adventure through the house and out into the garden. They soon escape the clutches of the toy dinosaur and the snapping jaws of the oven-glove crocodile, but then a very real pair of scissors threatens. A stunning, rhythmical story of childhood, memory and the power of imagination from the author of The Gruffalo, and new illustrating talent Rebecca Cobb. 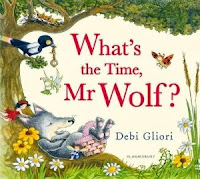 Accompany Mr Wolf as he goes about his daily routine from breakfast to bedtime - and get to know the real Mr Wolf! Little ones will enjoy recognising familiar faces from a plethora of nursery rhymes, including Little Red Riding Hood (masquerading as the post girl), three cheeky little pigs (who make prank calls), a cat who's a dab hand at the fiddle, plus four and twenty blackbirds. An enchantingly original story inspired by the well-known playground tag game, this is also perfect for practising telling the time. 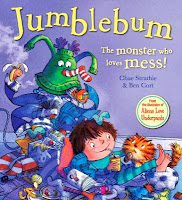 A funny story... all about the importance of tidying up. Johnny thinks that his room has its own special style. But his mum thinks his room is... a MESS! Johnny doesn't care... until all the chaos attracts the terrible Jumblebum Beast. Will Johnny end up in the Jumblebum's tum - or can his secret plan save the day?

All P1 children in Scotland will receive a free copy of each of these books during Book Week Scotland in November. 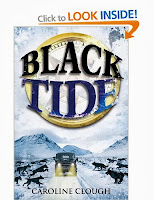 Toby's dad and little sister have been kidnapped by pirates, and Toby is left alone in the aftermath of the terrible Red Fever epidemic, which has wiped out much of the world's population. Menacing tribes of super-intelligent dogs are gaining ever more ground in Scotland, moving northwards. A mysterious figure called The General is leading a group of villains who are kidnapping people and imprisoning them in a place he calls New Caledonia. But where is this New Caledonia and what does The General plan to do with his captives? Toby sets out on a perilous mission to find New Caledonia and, he hopes, his family. This is the dramatic sequel to Red Fever, which won the Kelpies Prize in 2010. 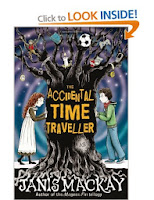 One ordinary day, Saul is on his way to the corner shop when a girl appears suddenly in the middle of the road. She doesn't understand traffic, or the things in shops, and she's wearing a long dress with ruffled sleeves. Her name is Agatha Black. Agatha Black is from 1812, and Saul needs to find a way to get her back there. With help from his mates Will and Robbie, he tries to work out how to make time travel happen. This pacy, time-travelling adventure from Janis MacKay, author of the Magnus Fin series, is full of funny misunderstandings and gripping action. 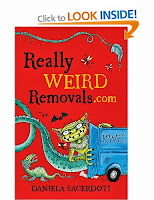 Mischievous fairies? Stranded mermaids? Smelly troll? Whatever your supernatural dilemma, call the Really Weird Removals company! Luca and Valentina's uncle Alistair is a paranormal investigator. When he realises the children can see the supernatural creatures that share our world, he invites them to join his team. With the help of Camilla, a friendly ghost, the Really Weird Removals team save a real-life stranded Nessie, help a selkie come ashore, and befriend werewolves. But this exciting new world is also packed with danger. When confronted by malicious kelpies and hungry vampires, can their wayward uncle keep the children safe? 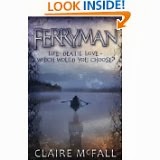 When Dylan emerges from the wreckage of a train crash onto a bleak Scottish hillside, she meets a strange boy who seems to be waiting for her.
But Tristan is no ordinary teenage boy, and the journey across the desolate, wraith infested wasteland is no ordinary journey. Life, death, love - which will Dylan choose? 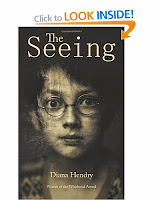 1953. When wild, dangerous, break-all-the-rules Natalie arrives in the quiet town of Norton, thirteen-year-old Lizzie is drawn irresistibly to the new girl from the wrong side of the tracks. As the girls grow closer, Natalie and her strange, eerie brother, Philip, reveal a shocking secret. For Philip has a second sight, and all around them he sees evil - 'left-over Nazis' lying in wait until the time is right for revenge. Natalie and Philip believe it's up to them to root these people out of Norton. Lizzie is swept up in what starts as a thrilling game - but the consequences of Philip's 'gift' quickly spiral into disaster. A chilling, powerful tale from Whitbread Award-winner Diana Hendry.

The Book of Doom by Barry Hutchison (Harper Collins)


The second hilarious book in the comic fantasy Afterworlds sequence.
There’s panic up in Heaven. They have mislaid the Book of Doom – the most important object in existence. They think Satan might have stolen it, so to save the world fifteen year old Zac and his angelic guide Angelo are sent to retrieve it. Sadly directions aren’t Angelo’s strong point and they soon find themselves just as lost as the book, wandering through Afterworlds such as Valhalla and Hades and encountering some colourful characters along the way. Can the hapless pair make it to Hell and back?
The awards are run by Scottish Book Trust in partnership with Creative Scotland and are voted for entirely by children - nearly 32000 last year! All over Scotland for the next seven months (until 7 February 2014), children will be reading and voting. Do you know some who would like to join in?

The winners will be announced on Wednesday, 5th March 2014.