I was delighted to win copies of three Picture Kelpies via a Twitter competition from Scottish publisher, Floris Books, who also produce Young Kelpies for 6-9s and Kelpies for 8-12 year-olds.) There are child-friendly websites to go with the books - Discover Kelpies (including Young Kelpies) and Picture Kelpies - and Floris also sponsors the Kelpies Prize and the Kelpie's Design and Illustration Prize. I bought many Kelpies when I was responsible for a children's literature collection and generally found them to be high quality. However, I was not asked to write a review, favourable or otherwise, and these are my personal opinions on the three books: 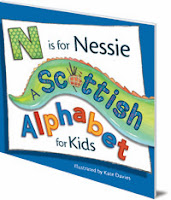 Kate Davies: N is for Nessie : A Scottish Alphabet for Kids

This bright, colourful book gets well away from the "A for Apple" clichés. My favourite page is Puffins, because they are so cute, and the one that made me laugh out loud was the double page spread for U and V - Umbrella and Very, very wet! The clouds of Midges ran that a close second though. I wondered how X would fare - cleverly, there is no word, but a beautiful blue Saltire fills the page. However, non-Scottish children need not be confused: there is an explanation for every letter at the back of the book. 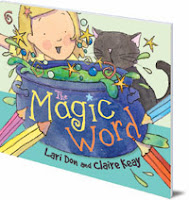 Despite the passing of decades, I can still remember the frustration of having to write thank you letters as a child. The first one was easy, but, oh dear, the repetition! It seems nothing has changed as Lari Don's Catriona despairs at having to finish her letters before Granny will let her play with her birthday gifts. Her attempts to make the task quicker are amusing, and become disastrous when she tries to use a spell (the magic word is, of course, please). Children will enjoy laughing at the mess she makes, but all ends well - the magic word reverses everything and she settles down to write the letters herself. And, guess what? It doesn't take nearly as long as she thinks. Some lessons in perseverance and politeness here, as well as a whole lot of fun. 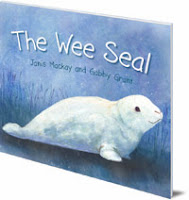 This book has a beautiful island setting which very much reminded me of the illustrations in the Katie Morag books, so they might appeal to the same children. It tells the story of a fluffy, white baby seal and the efforts of Jamie to protect it from tourists who think it has been abandoned. They don't know that its mother goes hunting in the sea in the morning but always comes back at night. Eventually, the baby seal grows up, loses its fluffy coat and the two seals swim away together. A nice way to learn about the lives of seals - and the right way to treat nature.

I enjoyed all three books and will now be donating them to my local library so that lots of children can enjoy them too.