Boys, birds and beasts: a trio of picture books

And what do the boys, birds and beast have in common? Well, all three books have a theme of escape - from home or from hunters, including the human kind. Let's start with the birds. 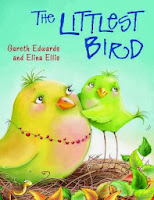 Seven green birds share a beautiful nest at the top of a tree, but the littlest one is not happy. The nest is cramped and it's crowded and she doesn't get enough attention, so she packs her bag and sets off to find a better place. Eventually, she finds a nest which is empty apart from one large egg - but what's that loud cracking sound? Suffice it to say that Little Bird gets a very big surprise and decides that home is best after all - where, of course, everyone has missed her.

This would be a comforting read for any child who occasionally feels crowded out by the rest of the family (i.e. all of them at some point.) I liked the little birds whose chubby bodies reminded me of the Twitter bird or a more benign version of Angry Birds. 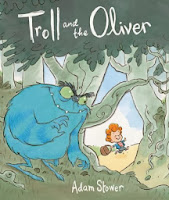 Adam Stower: Troll and the Oliver.

A boy and a mythical beast now. Troll and the Oliver (yes, that is the right way round) start off as enemies. Troll is determined to catch and eat the Oliver who is usually too quick and clever for him. Finally, Troll succeeds in catching him, only to find that, actually, Olivers taste REVOLTING and Troll spits him right back out. Fortunately, the Oliver is a nifty baker, they discover together that all trolls love cake and harmony ensues. There's even a recipe from Trolliver's Cookbook on the back endpapers in case you ever need to feed a passing troll.

I liked big, blue Troll with his marvellously expressive eyebrows, but was less fond of the Oliver with his teasing, self-satisfied ways. The book is beautifully produced with one half-page "reveal" and a cutaway cover. I'm afraid I always look at those with the eyes of a librarian though. Where are we supposed to stick the labels, for goodness sake? 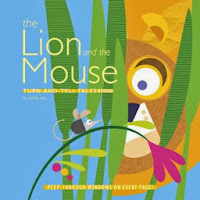 Nahta Noj and Jenny Broom: The lion and the mouse.

More paper engineering in this retelling of Aesop's well-known fable. A lion helps a mouse reach her favourite food, but scoffs at the idea that the favour can ever be repaid. How could a tiny mouse help a mighty lion? He finds out when the hunters catch him in their nets....

Every page is die-cut so that the reader makes the story happen by turning the page which, for example, lifts the nibbled nets from the lion. (There is also a hole in the cover, but plenty of room for labels, hurrah!) The illustrations are colourful and cheerful, but I found the brightness and the lack of an outline to the figures detracted from clarity, so that sometimes I just seemed to be looking at a big pattern. Maybe that's just me and a child would do better!

I was sent these books by Templar Publishing, but was not required to write a review, favourable or otherwise. The books will soon be on their way to a local library and will, I hope, be enjoyed by many children.
Posted by Anabel Marsh at 17:00