Two prize announcements this week - the Guardian Fiction Prize was won by Rebecca Stead for Liar & Spy. I've not read it yet, but When you reach me was a wonderful, intriguing novel so I have high hopes of loving this one too. It's the first time an American has won this prize apparently. 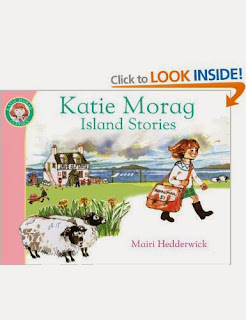 The short list for the Roald Dahl Funny Prize was also announced. I don't, I'm ashamed to say, know any of the books but I'm sure titles such as Noisy bottoms will have a certain appeal.

Finally - something I do know about: Katie Morag. CBeebies has now filmed 26 episodes of these delightful stories about a little girl living on a fictional Scottish island. Although Katie Morag's Struay was based on Coll, one-time home of author Mairi Hedderwick, the programmes were made in Lewis. I hope they boost tourism to all the Hebridean islands when they air next month. It's been too long since I had an island-hopping holiday myself!
Posted by Anabel Marsh at 16:25