In honour of Children's Book Week, Booktrust has announced its Ultimate List - 100 books every child should read before he / she is 14. It's split into four age-groups and covers the last 100 years. Until 15th November you can cast a vote in each category and the top books will be announced on the 25th. Instead of the normal Friday roundup, I thought I'd spend time thinking about this and my choices are below. I have to say, many of the books on the list were published long after my childhood (and I'm nowhere near 100 before you even think about asking), but I did know most of them through having worked in libraries for the last 30+ years. 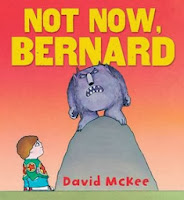 Poor Bernard tries to tell his parents about the monster in the garden, but will they listen? No! They fob him off with "Not now, Bernard" until it's too late - the monster eats him.

I've chosen this because it's great to read aloud - I remember using it in story-times when it was first published in the 1980s. The illustrations are clear and easy to see, even for those at the back of the group, it has plenty of repetition for the children to join in with, and it builds up their anticipation with an agreeable shudder.

For this age-group, I was torn between two books from my own childhood. I loved the Milly-Molly-Mandy stories about a little girl growing up in the 1920s but I'm not sure they would appeal to children of today, whereas I think Paddington is timeless. The eccentric bear who comes from "Darkest Peru", and keeps a marmalade sandwich in his hat, gets into all sorts of scrapes that reassure a naughty child that he or she is not alone.

The choice is becoming increasingly difficult as I move through the age-groups. Here, I am again torn between childhood favourites (Swallows and Amazons and The Lion, the Witch and the Wardrobe to name just two) and books that impressed me later (Private Peaceful, Flour Babies and Goodnight Mr Tom could all have made the cut.) I finally decided on Skellig, currently celebrating its 15th anniversary, because it is so different. Who is Skellig? Is he an angel?  If he is, he's a contender to be the most cantankerous one in literature. Does he, as Michael appears to think, help save his little sister? This story packs a real emotional punch.

Tough choices again. There are three titles on the list which start off trilogies which I greatly admire: The Hunger Games, The Knife of Never Letting Go and Northern Lights. I've gone for the latter mainly because of the book's heroine, Lyra, who is funny, courageous and fiercely intelligent. The cast of supporting characters is varied and equally lovable  - or loathable in the case of Mrs Coulter and her cronies - and the concept of daemons (a sort of external soul) allows an extra level of commentary as they and their humans consider events. I also liked the alternative, rather steampunk, world that Lyra lives in. I can't read this in public though; there's a scene towards the end that makes me cry every time.

So those are my choices and I've now voted. What will you choose? And can you spot a pattern in my choices? When I looked them over at the end I realised that all the authors were men. So here is my alternative all-female list which I could just as easily have chosen: