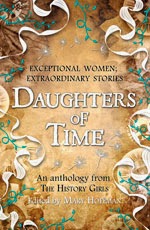 One of my favourite blogs is The History Girls, a collaboration by a group of female historical fiction writers who cover different periods and different age-ranges, but are always interesting. I make a point of checking it every day, and never fail to learn something new. Now, some of the writers for younger readers have published a book, Daughters of Time (Templar), in which each imagines a story about a famous woman from the past.  The author also explains why she chose to write about that particular woman, and gives some factual information so that the tale is put into context. Then, if you like her work, there's a section at the back telling you what else she has written. The book's editor is Mary Hoffman, whose Stravaganza series I loved, and she says:


History is about chaps is still all too true a saying. So it's up to the fabulous History Girls to balance this approach with stories of impressive and inspiring women and girls - we were spoilt for choice.

They certainly were. The book ranges in time from Katherine Roberts' Tasca's Secret about a daughter of Queen Boudica (c.30-c.60 AD) to Leslie Wilson's 1980s tale of Greenham Common, which was one of my favourites because I've actually been there (though only for a day, not to stay at the camp). Some of the stories are not for the faint-hearted - the Boudica story and the next one, The Lady of the Mercians by Sue Purkiss, are quite bloodthirsty! But life in those times was like that: nasty, brutal and short for many people.

The book really appealed to me because of the work I do with the Glasgow Women's Library's Women Make History Group, which has a similar aim, so I was delighted when Templar agreed to send me a review copy. It will now find a home in GWL's new children's collection. However, I'm wondering how many of the women Scottish girls will actually connect with, as the list is very England-centric. The Greenham story will have universal appeal and there's a lot of interest in the Suffragettes, so Celia Rees on Emily Davison (Return to Victoria) will be popular - I think that was my overall favourite - but some of the others never figure on the Scottish curriculum. This is by no means a criticism of the book, which I really enjoyed, it just made me wonder if someone could write a Scottish equivalent. Any takers? And who would you put in it? Other than Mary, Queen of Scots who's a tad overdone!