Thanks to the good folk at Templar and Hachette for sending me the following: 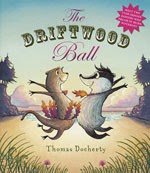 Every year the badgers and the otters hold a Driftwood Ball, but they never mix. Then, one year, otter Celia and badger George meet and fall in love - can the star-crossed dancers overcome the prejudices of their families? This is a lovely tale about differences and the silly reasons we find not to like other people - they're too loud, or they eat the wrong kind of food. At the end, Celia and George are still dancing "but always to their own tune."

Many children love books on dinosaurs. Here is a glossy addition to the canon. It's in the form of a story and the Gigantosaurus is made up, but all the other dinosaurs are real and there is an information section on them at the end. Add to this fold out pages and a poster jacket with a timeline on the other side and you have a sure-fire hit. 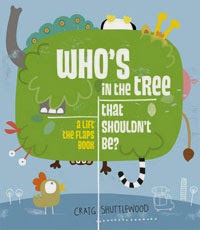 Craig Shuttlewood Who's in the tree that shouldn't be? (Templar).

More paper engineering - this time lots of flaps to lift. Who's in the tree that shouldn't be? Who in the snow just does not go? The rhyme romps along and children will enjoy guessing which "wrong" animal is behind the flap and where that animal should rightly be. I'd rather they had all ended up in their natural habitats at the end though, rather than in the zoo. 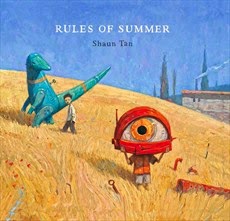 Shaun Tan's picture books are generally for an older audience than the titles above. This is a dark and surreal tale of two boys and what they learned last summer. Some commandments are quite sensible (never give your keys to a stranger), while others are bizarre (never leave a red sock on the clothesline). All have terrifying consequences - the red sock, for instance, conjures up a horrifically red-eyed giant rabbit. Towards the end, the smaller boy is padlocked into a runaway steam engine and the older boy runs across a dystopian landscape to rescue him with bolt-cutters. If this sounds sinister, it is! Be careful which child you give it to.

As always, I'll be donating these review copies to a local library.