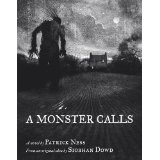 When I wrote here in March that the Carnegie / Greenaway shortlist had been announced, I pointed out two historic possibilities. First, the Carnegie, for the writer of an outstanding children's book, could be won by the same author two years in a row. Patrick Ness won last year for Monsters of men and was nominated again for A monster calls. Winning in consecutive years has only happened once before since the award started in 1936 - Peter Dickinson won for Tulku in 1979 and City of Gold in 1980.  Second, the same book could also win both awards because the illustrator, Jim Kay, was on the shortlist for the Greenaway which rewards distinguished illustration in a book for children. This has never happened before. Well, the winners have just been announced today, and they are......Patrick Ness and Jim Kay! Here's more information.

The book was written from an idea of Siobhan Dowd's - she died before she could write it herself. A trust has been set up in her name to bring books and reading to disadvantaged young people in the UK.


CILIP, which runs the awards, has press releases on its site.


Walker Books, the publisher, describes the book here. They are justly proud of the awards, and have a nice picture of the winners on this tweet.


Walker also has a trailer for the book on YouTube

The Guardian, as ever, has a lot of useful information:

The story of Patrick Ness's win.
An article by Patrick and Jim on how they made the book.
A picture gallery.

Patrick said in his acceptance speech that "At its core, it's a book about love & the bravery it requires". I've read the book and agree wholeheartedly. I found it very emotional but I can't add anything to the review on the blog Did you ever stop to think & forget to start again? I think you should all read it for yourselves!

Guardian (again) Patrick Ness slams library cuts (an edited version of his acceptance speech). It's absolutely brilliant. Read it! And Teenagers deserve better, a piece by Patrick Ness in defence of the teenager who is sometimes spoken of negatively.


Telegraph A Monster Calls: Patrick Ness and Jim Kay talk about their Carnegie and Greenaway wins.