Children's books and social justice: refugees and other stories 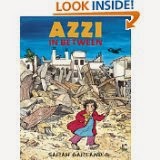 With Refugee Week Scotland coming up soon, it's great to report that the inaugural Little Rebels Children's Book Award, run by the Alliance of Radical Booksellers, has been won by a powerful refugee story. Azzi in between, by Sarah Garland, tells, in graphic format, of the frightening journey undertaken by Azzi and her parents, who have to leave their home because it is too dangerous to stay in their own country. Azzi is sad because she had to leave her beloved grandmother behind and because she can't speak the language of her new country. However, Garland shows how kindness and friendship can overcome feelings of difference, and there is a happy ending involving both the arrival of Grandma and a bag of beans! It's not hard to find books with empathetic portrayals of refugees for older children and teens, so it's good to see one for the younger market. For more information about the book and the prize, see the Federation of Children's Book Groups site.

Zoe Toft, of the excellent Playing by the Book blog, has been compiling a list of other books exploring the refugee experience. It's too long to reproduce here (and as yet, there is no online link) but she does point to some other online resources, notably Refugee Week's list of resources for children and the following bibliography:

Closer to home, don't forget the children's booklist, Refugees, from the University of Strathclyde

Finally, another prize dedicated to social justice and equality issues is the Frances Lincoln Diverse Voices Children's Book Award, which has just announced its winner for 2013, and there is a new(ish) blog Ink & Pen with the tagline "Thoughts on diversity in YA and children's literature".
Posted by Anabel Marsh at 11:43